What you will see over the skies of YPG

longhat any The recent request from Congress ssed the for U.S. intelligence agencies rounds to present an unclassified report ry. on unidentified flying objects or tion as Congress has labeled them arly Unexplained Aerial Phenomena cording (UAP), has incited the interest of many to know what’s out there. At Yuma Proving Ground (YPG) the question as to what is in our skies is not uncommon. The YPG Public Affairs Office receives inquires about objects seen above the installation. Frequently when speaking to groups in the greater Yuma area, Public Affairs Officer Mark Schauer fields ted questions from audience members ited asking about objects they have seen nuclear-in the sky around YPG. They even d at mistakenly attribute things they have thus seen far outside the installation’s what boundaries as YPG test actives. says What the public will see above our a for skies are; drones, weather balloons, er the the Aerostat blimp and illumination sed test rounds. lity by The biggest and most asked about first object in the sky is the Aerostat blimp that flies at 10,000 feet near Castle Dome. The blimp is one of eight that are part of the Tethered Aerostat Radar System owned by the U.S. Customs and Border Protection. They are used for surveillance of the southern U.S. border. Another type of hovering object passersby might see in the skies above YPG are weather balloons. “It’s a rubber balloon starting in diameter about three feet and it’s filled with noble gas helium that naturally makes it float away. At the end of that balloon is has a string 50 feet long and it has a meteorological sensing package,” explains YPG Chief of Meteorology Nick McColl. That weather balloon is used to measure temperature, humidity, wind speed and direction. Wind speed and direction are variables that may affect the performance of a round fired. YPG’s metrological division launches the most weather balloons was t test arate d e space, f their ne e was pasm, ittle sted d in and nge y have odate PG was tile oldiers se ery as it m the Korea ighting aft d by ut the . in the United States, about 3,500 a year. Those seeing a balloon might notice it changes shapes as it slowly rises. “It keeps getting bigger and bigger as it goes higher into the air because the air pressure is less,” McColl explains, “It’s shape will kind of change as the wind impacts it. If it gets any shear it might cause the balloon to get more disc like or elongated so it can make some cool shapes but for the most part its reality spherical.” Another flying object in the sky those driving down Highway 95 might see are drones of all types and sizes. YPG is the home of the counter-unmanned aerial systems (UAS) school which trains individuals from all branches and agencies and provides on-hand experience in flying drones and engage in realistic scenarios. One the testing side, Yuma Test Center conducts drone testing. “YPG supports many different sizes of drones from small that are hand-tossed to launch all the way up to ones that take off from runways interchangeably with manned aircraft,” explains Aviation Branch Chief Robyn Tiaden. Drones are uniquely shaped, most have a smooth exterior and some have no windows. Some might consider the illumination rounds launched from the Munitions and Weapons (M&W) Division mysterious lights in the sky. M&W Division Chief Kermit Okamura describes the rounds that are launched day and night when tested. “They are burning flares that slowly fall to the earth because they are tethered to a parachute.” He adds that the rounds launched during day light have an extra feature, “You will see the flare burning but you will also see a smoke trail coming down too.” The illumination rounds light up and burn, then disappear within about a minute or two. The purpose of the illumination rounds is to light up the night sky to provide the Warfighter on the ground visual aid to identify the adversary on the battlefield. So if you look above the skies of YPG you will not see any UAPs but you might see one of the many pieces of data collection equipment or test items YPG tests before putting them in the hands of our Warfighters so they can protect our freedom. 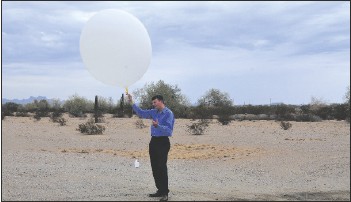