Affectionately known as the “Sweetheart of the hospital,” Marie Van Orden has been a volunteer at Yuma Regional Medical Center for 42 years. In those years, she’s contributed more than 22,000 hours, with no plans to slow down her commitment. She started volunteering as a way to fill her days after her late husband, a Marine, was transferred to Yuma in 1975. Her children were in school and she had time on her hands, she explained. And the hospital needed Spanish interpreters. A native of Puerto Rico, that was something she could do. So she became part of a group of Spanish-speaking interpreters for the hospital. She did that for about 13 years. Over time, though, the hospital had more Spanish-speaking employees and the need for the interpreter group waned. Meanwhile, Van Orden had found a new passion. After taking a class in flower arranging at Arizona Western College, she began creating silk flower arrangements for the hospital’s gift shop and Baby Boutique. Her creativity also extends to making candy bouquets. It’s a joy, she said, to know how much pleasure her arrangements bring to patients when they receive them. Hundreds of other Yumans also donate their time and talents to help their fellow residents. They walk dogs and foster kittens for the Humane Society, give up their Thanksgiving and Christmas to serve holiday dinners to the homeless, lead Boy Scout troops, organize Girl Scout cookie sales, teach 4-H members how to care for their lambs, work in thrift stores, make lap quilts to comfort cancer patients as they undergo chemotherapy, sort food boxes for the hungry, support their churches, perform beautiful music in the Yuma Civic Orchestra, paint over graffiti and cheer up the sick in the hospital. They show appreciation to farmworkers and organize town halls to facilitate discussion about issues facing the community. Other times, volunteering is performing a spontaneous act of kindness such as coming to the aid of a stranded motorist or making dinner for a new mother. These large and small acts, given freely, are what bind communities together. “It shows how we as human beings interact,” observed Linda Elliott-Nelson, AWC vice president of learning services. “There are quite a number of places people can volunteer to benefit the community … whatever people value. It’s part of going forward as human beings … the importance of giving services. We want to be able to benefit others. But by doing good deeds, we also are recipients.” People who volunteer want to gain experience, acquire new skills, meet new people, booster their college applications or fill their time. Others just want to give back to their community, to help a friend or promote a worthwhile activity. They do it because it makes them feel good. “Maybe someone doesn’t want a job but they want to do something that makes them feel good, maybe use some of their skills,” said Randy Nelson, executive director of the AWC Small Business Development Center. “They can volunteer and be part of something.” Volunteering isn’t limited to the retired, though. Through the AWC Matador Ambassador program, college students serve as mentors to students at O.C. Johnson Elementary School, noted Biri Martinez, assistant to the vice president of learning services. The AWC students visit the school regularly to meet with the younger students and encourage them to pursue their education. “We see the O.C. Johnson students blossom under the attention,” said Martinez. “We should all be ambassadors.” Community service is also a culture often found among high school students who contributed thousands of volunteer this last school year, whether as part of the students’ involvement in such organizations as FFA or National Honor Society, because it’s something they’ve become passionate about or a desire perhaps to help a fellow classmate in need, said Eric Patten, community engagement and communications director for the Yuma Union High School District. It’s part of the Career and Technical Education program, which includes 7,700 of the YUHSD’s total 11,000 students. San Luis High School students collect food and other items for Crossroads Mission, FFA students recently harvested 7,000 pounds of carrots for the Yuma Community Food Bank, groups at the various high schools have raised money for Children’s Hospital in Phoenix and for a classmate facing surgery. They collect food, pick up trash and assist with graffiti control. What he has observed, Patten said, is that while community service is encouraged, students almost always want to do more. “My impression is that students involved through school see the value of service and want to go above and beyond and do more. There’s a 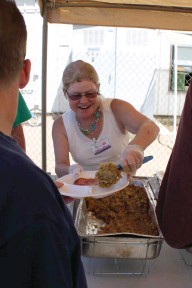 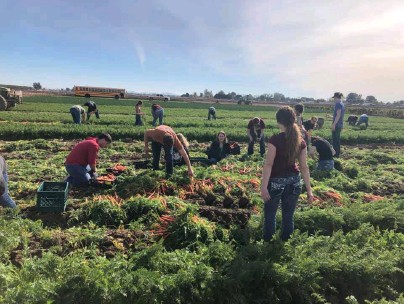