The annual migration will soon begin in Yuma, both fowl and their prey flooding the local fields. When dove season opens Sept. 1, thousands of hunters will arrive from all over the nation looking to bag mourning and white-winged doves that are passing through the area on their trip home. The coronavirus pandemic raised concerns about whether out-of-towners would make their own journey to participate in the friendly yet competitive sport. The show will go on, but to what extent remains to be seen. “Hunting and fishing are outdoor activities that are recommended by the governor of Arizona,” said Chris Bedinger of the Yuma region office of Arizona Game and Fish. “Even during the coronavirus, people can socially distance outside. The actual hunt hasn’t been affected itself, but could affect the people coming to Yuma. Hunters are going to show up, but we don’t really have an idea of how many.” One thing is certain: The doves will be waiting. The doves routinely flock back toward Mexico after the summer monsoon season in Yuma. However, the lack of rain this summer has left an abundance of birds within the county limits. “The white-winged dove breed along the Colorado River,” Bedinger said. “Typically, when we have an opener like we do now and we haven’t had a monsoon season, the birds are still here.” Since the start of dove season falls on a Tuesday, Bedinger expects fewer hunters for opening day. But by Labor Day weekend, a second wave of hunters should arrive. COVID-19 is expected to keep a handful of hunters at home, but the virus will not deter many of them. “COVID-19 might stifle a few people,” wildlife manager Richard Myers said. “But I predict a lot of people want to get out of their state, get out of the house and do something. Dove hunting is kind of the kickoff to the hunting season and it’ll be an excuse for people to get out in nature for the first time in a while.” The annual kickoff to the dove-hunting season also is good for business. Hotels have been taking reservations all year for the first week of September, according to Visit Yuma’s executive director, Linda Morgan. “Of course, we’ve dealt with COVID-19, but it is a great sport to go out there and be able to socially distance,” she said. “I think people will still come.” Morgan said most of the out-of-town hunters drive to Yuma, sparing them the anxiety of air travel amid a pandemic and offering a boost to the local economy. “They come and stay in the hotels. They eat in our restaurants and shop in our retail,” she said. “Most hunters will go out in the morning and they are looking for things to do throughout the day.” URBAN LEGENDS AND STORIES THAT OCCUR IN THE FIELDS Everyone hopes to leave the fields with a story to tell. Anyone who has hunted or fished has heard a tall tale about someone shooting a 20-point buck or reeling in a 15-pound bass. Any gamesman hopes one of these urban legends will come to life on the water or in the woods. But when it comes to dove hunting, what compares to the coveted fish story? “The biggest urban legend regarding dove hunting would be, ‘I remember back in my day there were thousands of dove that were flying in the sky,’” Myers said. “Nowadays, we don’t have the bird numbers we used to have. So, the urban legend is the skies used to be black with dove flying. I don’t know if that’s true or not, we always have a good flight here in Yuma. “That’s just a good urban legend from the old-timers.” Whatever the case may be, there certainly can be some unusual things that can occur, or can even be shot, during hunts. “We talk about your target and beyond,” Myers said. “We have a lot of things that fly in the sky. We’ve seen a lot of strange birds shot that are not dove. We’ve seen everything from a dove to pretty much every kind of bird that’s not allowed to be shot, mostly by misidentification by the hunters. “We don’t want that, but that’s some of the unusual things we see.” One thing Myers hates to see is a hunter ending up empty-handed, but it’s a risk anyone who travels to Yuma next month will have to take. “Hunters will be in an area and for one group, the birds happen to be flying right over them,” he said. “They all get their limits, while the other guys sit on their box of shells and never get a shot off. That’s kind of how it goes. It’s kind of a funny thing. Guys spend a lot of money and never get the shot off. “That’s hunting. It’s a challenge.” Jackson Ramer can be reached at jramer@yumasun.com. A HUNTER STANDING ATOP A CANAL BANK on the Yuma Mesa takes aim at a dove passing overhead early on opening day. 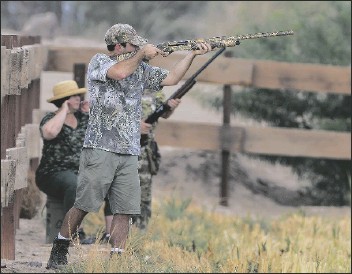 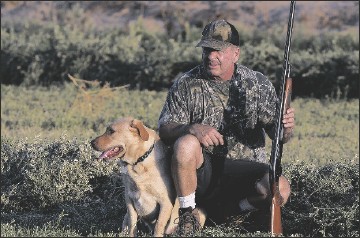