It’s diagnosed and treated similarly in all genders, so early diagnosis remains key. The science around the cause of male breast cancer is unclear, according to the Mayo Clinic, same as most types of most cancer, though male breast cancer is even more mysterious. People of all genders are born with some breast tissue and milkproducing glands (lobules) that transport milk to the nipples and fat. When a girl hits puberty, she develops more breast tissue, and boys do not. Boys, however, do still have the breast tissue with which they were born. The most common type of breast cancer in men is ductal carcinoma, which begins in the milk ducts. Just as with women, there is research indicating a family history of breast cancer increases the likelihood of a man getting the disease. Gene mutations like BRCA2 (the same mutation actress Angelina Jolie had that put her at a high risk of breast cancer) increases a man’s risk of breast cancer and prostate cancer. Older age remains a risk factor, as does exposure to estrogen, obesity or liver or testicular disease. Men who are born with Klinefelter’s syndrome, a genetic condition in which some boys have more than one copy of the X chromosome, also increase a man’s likelihood of contracting breast cancer. Early diagnosis and treatment is critical for best outcomes in male breast cancer, which can be harder since it’s not always the first condition tested for, so knowing the symptoms is important. These include a painless lump in or thickening of the breast tissue, changes to the nipple (redness, scaling or turning inward) or nipple discharge or changes to the skin covering the breast area. Men who see these symptoms should ask their doctor for further assessment. According to the Mayo Clinic, diagnosis and treatment is similar to what women experience: clinical breast exams, medical imaging that enables the doctor to see problem areas, or a biopsy, during which the doctor extracts tissue from the suspected tumor and tests it. Male breast cancer is often hormonerelated, so doctors may recommend hormone therapy in addition to surgery, chemotherapy and radiation. 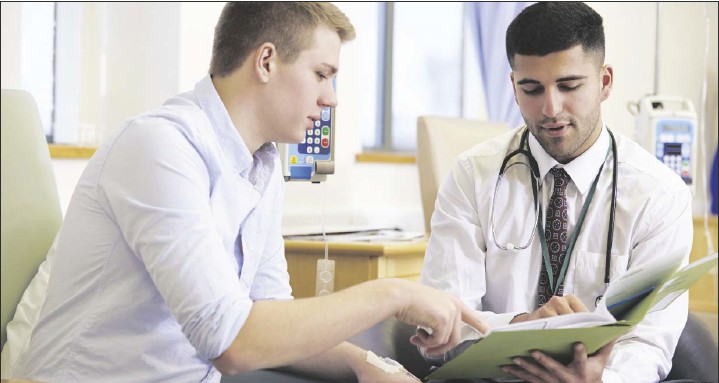