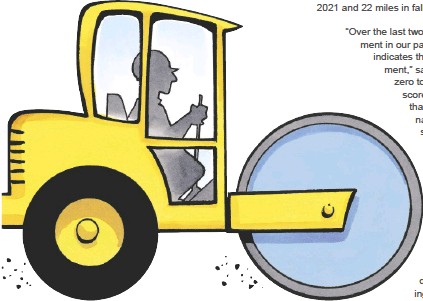 WITH SCHEDULED IMPROVEMENTS for 24 miles of roadways this spring, the City of Yuma is keeping a pace for pavement preservation that continues its commitment to augmenting the overall condition of the City’s streets. The next round of sealant work in the City’s pavement preservation program was slated for April 11 through May 6. The City will supervise the application of approximately 22.4 miles of slurry seal and approximately 1.5 miles of oil sealant. Crews will focus primarily on neighborhoods in the southeastern quadrant of the city limits, along with well-traveled streets such as 1st Street and 3rd Street. Due to a number of circumstances, including losses of promised Highway User Revenue Funds from the state, the City found itself having to play catchup during the previous decade. A 2017 comprehensive study of the pavement conditions on Yuma roadways by Infrastructure Management Services had revealed the City would need to maintain 23 miles of roadway a year just to keep existing pavement alive. The City has been making headway over the past two years, almost doubling the miles of roads previously serviced. In spring 2020, the City was only budgeted to apply sealant to 10 miles of roadways. Since then, the City sealed 28 miles in fall 2020, nearly 26 miles in spring 2021 and 22 miles in fall 2021. “Over the last two years we’ve seen an improvement in our pavement condition index, which indicates the overall status of that pavement,” said Michael Flowers. “It’s on a zero to 100 scale, so if we can keep our scores at an average of 60 and above, that’s going to reduce our maintenance requirements and make our streets more pleasant to drive on.” In addition to the number of roadways, the City has also used a more robust slurry seal mixture in terms of pounds per square inch, which improves the longevity and feel of the driving surface and the life span of the pavement. “With this improved new standard of slurry seal, we are improving overall pavement conditions, and we are increasing pavement life span, which will reduce the long-run costs on maintenance as well. So the improved budget for pavement preservation will make for a better long-term investment.” PAVEMENT ON TAP The spring 2022 pavement preservation program will work on the following neighborhoods and major streets. Find more information at https://www.yumaaz. gov/government/public-works/pavement-preservation. Major Roadways: • 16th Street Arizona Avenue to Interstate 8 bridge • 1st Street from 4th Avenue to Avenue B • 3rd Street from Avenue A to Avenue B • Virginia Drive from 20th Street to 24th Street • Water Street and West Wetlands Park parking lot Neighborhoods: • Tamarack 1-3 • Desert View • La Mesa Manor1-2 • Melody Park • Engler Estates 1-2 • Lowell Manor 1-3 • Sanguinetti Manor 3 • College Park 1-5 • Desert Ridge 1-4 • Adobe Ridge REPORT ROADS IN NEED Residents can report City roadways that may need attention through Yuma Click & Fix, the City’s new online reporting system, using the link near the top of the home page of the City’s website, www.yumaaz. gov. ✶