SOMERTON’S HIGH SCHOOL IS COMING - SO IS PARKVIEW COMMERCE CENTER

FOR DECADES THE city has waited for a high school that would serve Somerton’s youth. In 2015, with the help of many, Yuma County residents passed a bond proposition that included a request by Yuma Union High School District (YUHSD) for the construction of the first high school in Somerton. The district later followed by purchasing 76 acres of farmland in Somerton. The high school location was previously identified in the city’s 2000 General Plan, west of Cesar Chavez Avenue and north of Main Street (US 95). The 2020 General Plan also included the high school at the same location. The General Plan is the community’s vision that establishes city planning goals and strategies, normally for a period of 10 to 20 years. The City of Somerton, in order to follow through on the same vision, acquired 55 acres of farmland in September 2017, an area located north of Main Street (US 95) and west of Cesar Chavez Avenue. This property is south and west of the upcoming Somerton High School site. From that total land (55 acres), 15 acres are set aside for a community park, including a lake of approximately three acres in size serving a dual purpose: recreational activities and as an irrigation source for the City’s and the high school’s landscaping areas and ball fields. Another 20 acres will be used for potential mixed-use residential, primarily of mid density residential units. The rest of the City property, 20 acres, has been dedicated for the “Parkview Commerce Center,” a commercial development subdivision. On those 20 acres, the City’s intent is to incentivize economic development on the west side of the city – retail and employment related uses. To visualize those ideas from City Council and the community, J2 Engineering was retained to design a Master Plan concept. The City’s vision is broken down in parts, laying out a master land use plan, gravitating around the anchor core – the Somerton High School. City planning is a complex effort; it takes patience, expertise in the field, and understanding of the land development, planning, and building processes. Request for Proposals (RFP) Starting in 2019, the City of Somerton published a Request for Proposals (RFP) inviting land developers to submit bids to develop the 20-acre parcel. In 2019, Economic Development Staff received few calls expressing interest on the city property, but full commitments were not secured. Land development interests were halted in 2020 during the COVID-19 pandemic. Now, this year 2021, land development interest is back in full force. Based on previous conversations held with land developers, a decision was made to subdivide the 20-acre city property into commercial lots. That’s when the “Parkview Commerce Center” idea was born. Parkview Commerce Center The City contracted with Dahl, Robins, and Associates to work on the subdivision plat. On March 2, 2021, City Council approved the Parkview Commerce Center Preliminary and Final Subdivision Plat, an 8-Lot commercial subdivision. Due to the building size of one of the proposals, Lots 7 and 8 were later combined as one lot. Infrastructure Installation As of July 27, 2021, the city has begun the construction and installation of the sewer infrastructure, with water infrastructure to follow right after. More residential developments are expected on approximately 160 acres located just north of the high school site, a farmland area with residential zoning already in place. The “lift station,” now under construction, was designed to support the sewer demand needed for the high school and its surrounding residential and commercial developments. “I am in favor of education, a local high school is best for the youth of this community,” said Jesus Tovar, a local farmer. Mr. Tovar agreed to let the City install the sewer lift station on a corner of his property located near the high school site. Current Development Activities On June 15, 2021, City Council selected Sunset Community Health (24,000 s.f. building) for Lot #1 of Parkview Commerce Center. On July 20, 2021, City Council selected two retail buildings (about 14,000 s.f. each) for Lot #2, and 4th Avenue Gym (a 20,000 s.f. building) for Lot #7. Lots 3, 4, 5, and 6 are still available for bid land development opportunities. About $100 million of economic development impact is expected in Somerton due to the infrastructure installations, Somerton High School, mixed-use of residential and city park, and with the Parkview Commerce Center. Land developers, business owners, and/or investors are all invited to submit their proposals to the City’s Economic Development Office. It’s the right time to invest in Somerton! Contact Hector Tapia at (928) 722-7390 or by email: hectortapia@somertonaz.gov. 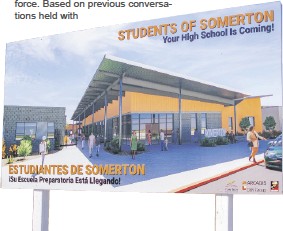 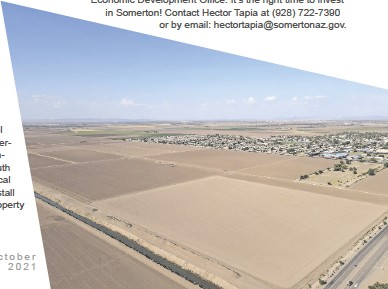