TO THE STRONG WOMEN IN BUSINESS IN YUMA COUNTY

WITH THIS MONTH’S issue being about women in business, I wanted my letter to be about women in business as well. After all, I am a woman in business, but I simply suffered from writer’s block. What to say? Then, the lightbulb came on. At the Chamber, we do understand the struggles of opening and running a business, but as a woman and the executive director, I also understand some of the unique challenges of being a woman in business. I am brought back to December 2009. I was in Washington, D.C., for two days of Congressional meetings right before my son’s very first school holiday program. He was a kindergartener. I had my flight all timed out to get me home early afternoon in plenty of time to make it to the evening show. Shortly after my arrival at the airport, I hear those dreaded words, “Flight 123 to Phoenix is canceled.” I go to the ticket counter only to be told the earliest they can get me home is the next day. In business, I can remain calm even in very stressful situations. In this particular instance, however, the mom side of me took over and she turned into a puddle. Literally, the poor ticketing agent had probably never seen someone crying so hard at her station. Fortunately, the story does have a happy ending. She ended up getting me a flight on another airline, and I got to my son’s school 30 minutes before his show. While this story could just as easily have happened to my husband who loves our son very much, I know he wouldn’t have felt the enormous weight I did to get home for that show. It’s usually a mom thing. A woman thing. Of course, that is simply the pressure we put on ourselves. Sometimes there is pressure from the outside world, too. My first two membership organizations were in construction. I nearly always went to meetings or conferences and was the only woman in the room. I regularly had people question if I knew what I was talking about. Sometimes, it was even more blatant. I applied to be the Executive Director of a construction organization (I won’t say which one, just know it wasn’t in Arizona so nobody local) and one of their board members called me and told me he was going to be blatantly honest. Their organization wasn’t ready for a female executive director yet. Fortunately, we’ve come a long way since those days. Unfortunately, ask most women in management or ownership positions and they’ll have similar stories. So, what I really want to say to all of you amazing women in business out there, you are not alone. There is an entire network of strong women in business in Yuma County. Keep doing what you’re doing and if you ever need someone to prop you up or just listen, reach out. We support you. 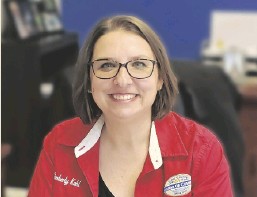