The lowdown: Iann led all YUHSD boys in goals with 21, and also added three assists. His season included five multi-goal performances, including a four-goal outing against Yuma High. Iann finished the season on a tear, scoring in each of the Sidewinders’ final eight games while helping the team reach the round of 16 of the 6A state tournament. 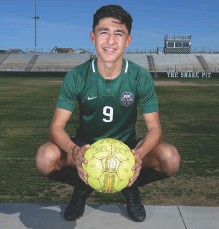